The advent of computing stimulates a desire to re-examine the subject of creativity. Though the computer can replace man in the production of graphic images, its function in the arts is seen as assisting in the specification of art systems and in their subsequent real-time management. An art of system or process is placed in the context of primarily the visual or plastic arts but the authors disavow concern with any ‘new’ or ‘modern technological’ art. Various types of art systems are mentioned and advantages of the fully interactive one are considered. It is pointed out that the inclusion of complex real-time responses in an interactive art system can frequently make use of a computer. In such work, the artist and the viewer play an integral part. The traditional role of the artist, composer or writer is thus called into question; it may no longer be necessary to assume that he is a specialist in art – rather he is a catalyst of creative activity. Three cases are discussed to illustrate the applications of this approach.

An Appraisal of some problems of achieving fluid man/machine interaction

The paper discusses the nature of complex decision making processes and is particularly concerned with those that involve creative thinking. The thesis is put forward that computer aids to such processes should be designed so as to relate the machine’s mode of behaviour to that of the human operator more directly than has been achieved to date. The problem is considered of how a set of suitable programs might be structured to allow users to go through a decision making process flexibly, in a way that resembles a designer’s, or other decision maker’s, normal mode of behaviour. In doing this a range of possible decision making structures is described and their characteristics discussed. Programming techniques are briefly considered. The problems raised in the paper are demonstrated in an example which analyses a design process for the generation of a one person dwelling unit

Ernest Edmonds, General Systems, Vol.XIX, pp.215-218.
The paper is based on a talk given to the BCS Computer Arts Society, London, December 1970.

The aim of the paper is to describe the process of software development as it often occurs unintentionally, in a way that might make it easier to recognize what is happening. An approach to the problem of controlling the process is indicated, as are the areas where detailed investigation would be necessary in any particular case. The non-technical users that concern us are people who do not write their own programs and do not wish to use the computer for a technical, well defined process. The development of software for such users is often made difficult because one cannot predict just which facilities are the best ones to provide. There may not be an existing system to analyse, and the analyst may not be able to invent one. It is suggested that the solution proposed may also allow users to adapt their methods at the same rate as the development of the software, giving a smooth and well understood change in the system.

In 1974, I was allocated a PhD studentship (from the then Science Research Council) to help support my computing research.

I decided to see if I could use it to accelerate the developments in computing and art. This was pretty tricky in view of the perceived subject boundaries at that time, but a couple of phone conversations with helpful officials at the SRC enabled me to find a way forward. With SRC support Leicester Polytechnic was not going to object. The next thing was to search for an artist who could, and would, take on this studentship and follow a PhD programme that advanced computing and art in some way. It was Stroud who told me of an excellent ex-Fine Art student of his department who was currently studying in Malcolm Hughes’ postgraduate course at the Slade. I invited Stephen Scrivener up to Leicester to talk about this possibility and, with his characteristic careful but determined approach, he agreed and took the studentship. Steve’s PhD was a practice-based study of computing and art, although we have refined what practice-based means quite considerably since those early days.
—from: Edmonds, E. Constructive Computation. In P. Brown, C. Gere, N. Lambert & C. Mason (Eds.), White Heat Cold Logic - British Computer Art 1960-1980. London, UK: MIT Press, 2009.p 353

The completed PhD was “An Interactive Raster Graphics System and Language for Artists and Designers” CNAA (Leicester Polytechnic). 1981.

It has been seen that, at least in the case of managers, there is significant discontent with the man/machine interfaces provided. It was further observed that the provision of an increased range of facilities did not noticeably improve the situation. It would seem that what is needed in such cases is a complex system that can be tailored to the user’s needs ion the light of experience.

When a systems designer is faced with the problem of designing the software for the man/machine interface he can thus be helped if he can economically delay his decisions until the system can be tried out with its potential users. Ideally it should be easy to modify the interface from time to time to meet the needs of changing circumstances and users. It might further to valuable to provide a variety of interfaces to one system, especially where the users have diverse skills and status. One solution to these problems, is firstly, to provide software tools that make the writing and changing of the interface a simpler task, and, secondly, to allow a number of versions of the interface to co-exist in the system. 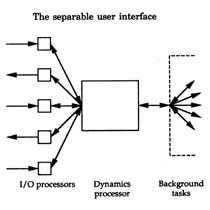 The man-computer interface: a note on concepts and design

The notion of identifying a part of a computer system, the man-computer interface, that can be seen as representing the user’s model of the system is explored. A particular classification of the components of an interface is presented. It is suggested that the design of the man-computer interface is central to the design of an interactive system. Certain design problems are discussed and problems requiring further research identified. 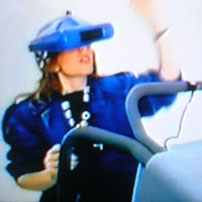 Interaction with representations of solid, surface or wire-frame models is an aspect of MMI design which has hitherto proved difficult to accomplish satisfactorily. For instance, input methods which describe motion or user instructions to the system, while simultaneously permitting free movement in the immediate environment, have as yet to be implemented successfully. It is argued that the union of several different interface media, necessary to facilitate this complex collection of tasks, might permit a better understanding of fundamental issues related to the problem. It is further argued that only through prototyping such collaboration in flexible MMI exemplars can hypotheses related to 3D interaction be fully tested.

Knowledge-based systems have introduced a new mechanism for the support of creativity. Where experts interact with a knowledge base in order to externalize and refine their knowledge they are involved in a process of coming to new understandings. It is that process that is a significant trigger for creative thought. The creative process that can result from this approach can exist in a wide variety of fields. Two examples have been studied. One is a case study of a scientist accelerating the generation of new ideas and the other, which is reported here, is the development of a new form of computer-generated video using precisely the same knowledge-based system approach. 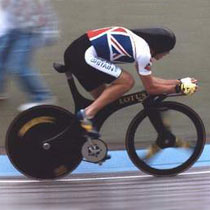 Knowledge Support Systems for Conceptual Design: the Amplification of Creativity

The paper is concerned with computer-based support for conceptual design and, in particular, with the support of creative design. The nature of conceptual design is briefly reviewed and the lack of effective computer support noted. Recent developments in computer-based Knowledge Support Systems, that offer interesting possibilities, are reviewed. The study of the early design of a clearly innovative product, the Lotus bicycle, is used to inform a discussion of the requirements for Knowledge Support Systems that can support conceptual design.

Computation, Interaction and Imagination: into virtual space and back to reality

The main aim of the research from which this paper arises is to identify requirements of computer support for creative work by investigating the work of artists and exploring the potential of new creative technology in this field. The paper reports upon an experimental artists-in-residence on the campus of Loughborough University during which events were recorded and analysed. The nature of the interchanges between artist and technologist as well as the artists’ perspectives upon the use of technologies and what they gained from it are described. One significant conclusion is that the influence of using computers on the artists’ thinking is quite as significant as any direct outcome in terms of product. The paper poses three questions and tries to find an answer to each by exploring the modeling of the results of the study in the context of what we know so far about computational approaches to understanding creativity. The results demonstrate that one aspect of VR may be understood in relation to previous studies of emergence.

The paper introduces the the Beta_space initiative, in which a public exhibiting space in the Powerhouse Museum, Sydney, was used as a real world research laboratory

This paper describes a study into the situated exerience of interactive art. The study was conducted with audiences of the artwork Iamascope and is framed by the four categories of embodied experience that have been proposed by its artist Sidney Fels. The video-cued recall method we employed was shown to reveal rich detail about situated interactive art experience. The results provide a detailed account of how the categories of embodiment manifest themselves in audience experience and lead to the proposal of a blueprint for the trajectory of interaction produced by Iamascope which may be generalisable to other interactive artworks.

The paper discusses aspects of digital art from the point of view of the notion of observable human – computer interaction. The use of the word interaction is reviewed and alternative approaches to describing the concept explored. In particular, a systems view is taken and contrasted with an action/response model. A refined view of such interactions is proposed in which artwork and audience are said to influence one another.